Waffles have a lot of fans around the world. People like a crispy crust on the outside and air dough on the inside. Waffles are increasingly associated with healthy food and, in this regard, significantly win the position of short pastry desserts. Wafer dough is cooked faster and does not require waiting, such as yeast dough. This is important in the restaurant business as it significantly reduces cooking time. The cost of waffles is lower than pastry, which is integral in the calculation of business profitability. Waffles are dessert for everyone. They can be served with different fruits, jams, and syrups, which makes them a truly universal dessert. The waffle can also be of any shape, depending on the waffle machine used. Belgian Waffles, Viennese waffles, Stick Lolly Waffles, Bubble Waffles, Taiyaki Waffles, and many other types of waffles are just different forms cooked on appropriate machines. Waffles can be cooked using gluten-free flour, but with consistency, shape, and flavor unchanged. Also, wafer dough can be made without ingredients containing animal protein, so that you can expand the offer for vegans in your menu. At the same time, the waffle will remain tasty, airy, and crispy.

Thus, the waffle remains one of the most desired and, at the same time, profitable dishes on the dessert menu.

A chocolate fountain is a set of cascades from 20 cm to 1 meter high, through which hot chocolate circulates. Before turning on, the necessary amount of chocolate is poured into the lower niche of the chocolate fountain. A heating element maintaining the temperature of about 60C is located under the bowl of the device.

The chocolate becomes liquid at this temperature. Melted chocolate rises to the upper bowl, then it flows down in cascades. Here, its temperature is again brought to the required level, and the process is repeated over and over again. The temperature of chocolate flowing from cascades is about 40°C.

Special chocolate, with a high content of cocoa butter rather than ordinary chocolate sold in bars, is used in the chocolate fountain. Its main difference is that it melts at a lower temperature (about 35°C) and has a lower viscosity.

It is necessary for the proper operation of the fountain, as well as for the convenience of its use with fruits and pastries to create fondue. There are several types of chocolate fountains that differ from each other in height (from 30 to 140 cm), the number of tiers (from 3 to 7), and the mass of chocolate loaded into them (from 1 to 15 kg). 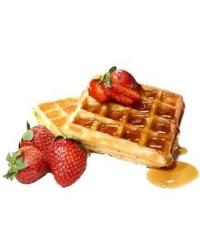 In North America, Belgian waffles are a variety of waffle with a lighter batter, larger squares, and deeper pockets than ordinary American waffles. Belgian waffles were originally leavened with yeast, but baking powder is now often used. They are often eaten as a breakfast food; toppings vary from whipped cream, confectioners sugar, soft fruit, and chocolate spread, to syrup and butter or margarine. They may also be served with vanilla ice cream and fresh fruit (such as strawberries) as a dessert.
Buy now
Previous post Next post